Kalapani belongs to Nepal - A brief history of Kalapani 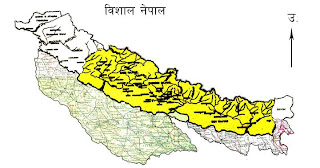 The North-Western Border of Nepal Background:  The Treaty of Sugauli of 4 March 1816 is the basis to delineate and demarcate the western/north-western border of Nepal, even though the Boundary Treaty of 1 November 1860 is implied specially to the south-western portion, as the restoration of Banke, Bardiya, Kailali and Kanchanpur districts as new territory (Naya Muluk).  According to the Treaty of Sugauli, river Kali is the western boundary of Nepal with India.  The boundary river, Kali is delimitated by Article 5 of the treaty.  It says “the Rajas of Nepal renounces for himself, his heirs, and successors, all claim to or connection with the countries lying to the west of the river Kali and engages never to have any concern with those countries or the inhabitants thereof.”  So the place, where the river Kali is originated is the north-western corner border limit of Nepal with India and China as tri-junction.


Status of the River Kali and Kalapani:
It is not yet demarcated the status and origination of the river Kali.  The river is known as Kali at the upper reaches, Mahakali in the middle portion and Sarjoo or Gogra or western branch of Gogra when it
comes down to plain area.
There is a controversy and much debate in the determination of the point of origination of river Kali, whether it is originated from Limpiyadhura (5,532 meter) or Lipulek (5,098 mtr) or an artificial pond (4,571 mtr).  The second debate is the location of Kalapani, whether it is located in the Nepalese territory or Indian side.  In another words, whether Kalapani belongs to Nepal or India!  There has been an issue of national interest for everyone that raised much hue and cry since October 1996.The Nepalese people of all walks of life from the students to the University teachers, laymen to the intellectuals, historians to the geographers/mapping experts, former government administrators to former diplomats, village committee chairmen level to political leaders, ex-policemen to even ex-military officers have expressed their views through the news media workshop, symposium, meeting and discussions.As regards the determination of the origin of river Kali, there are more or less three different thoughts.  The first and major section, who belong to the intellectuals, researchers, elite and informative community have opined referring historical documents, old maps and hydrological facts that the river Kali of the Treaty of Sugauli is originated from Limpiyadhura.  The second section i.e. the government machinery have expressed as the origin of the river Kali from nearby to the Lipulek pass.  The third is the Indian team of the Nepal-India Technical Level Joint Boundary Working Group and the Honourable Ambassador of India to Nepal and they have expressed their views that the river Kali is originated from a small pond, which is located south of Kalapani and further south of the Pankhagad stream.Now the main crux of the matter is to identify, which one is the river Kali of that period as the spirit of the treaty.  Description of origin of the river is not mentioned in the treaty.  In a sense, it was not necessary to make a description of the river at that time, because of the fact that there was no controversy and confusion 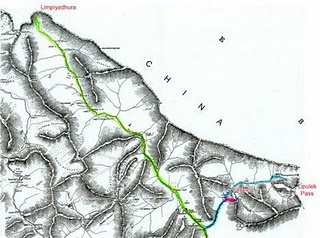 The Nepal-India Peace and Friendship Treaty which was signed on July 31, 1950 agreed to grant, on a reciprocal basis, to the nationals of one country in the territory of the other the same privileges on matters of residence, ownership of property, participation in trade and commerce, movement and other privileges of a similar nature. It became a major turning point in the movement of Indians into Nepal and was further reinforced by the Nepal India open border. However, it did not materialise until the installation of democracy in February 1951, which replaced the oligarchic Rana regime within three and a half months of the signing of the Treaty. It is said that in response to the evolution of incidents in Kashmir, the Nizam State of Hyderabad and the Indian states and territories bordering China, Sardar Patel, as he assumed the portfolio of Home Minister, strongly pleaded and persuaded Prime Minister Nehru to impose some sort of control on Nepal and the result was the Treaty of 1950 and it is clearly reflected in his letter to Nehru . It is to be noted that the Rana Government assisted Indian Government by sending Nepalese troops, when India had to face problems in Hyderabad during independence and in Kashmir in 1948.
Posted by Great Nepal at 11:11 PM No comments: